Thunderhawk products are
proudly made in the U. S. A. !

Thunderhawk Performance invented the first RZR Fuel Tank Skid Plate in 2007. In 2014 Polaris released the new RZR XP 1000 with the fuel tank exposed, just like all other RZR’s. Take a look under your XP 1000 or XP Turbo and you'll see that the rear half of the fuel tank is totally unprotected! It only takes one rock or stick to damage the fuel tank, which can leave you stranded. Plus, a new fuel tank costs almost $800 !!!

This Thunderhawk Performance Fuel Tank Guard is designed for maximum strength and to protect the fuel tank from all angles. Thunderhawk Performance manufactures all RZR Fuel Tank Guards from 1/8” thick aircraft-grade aluminum for maximum strength and light-weight. This aircraft-grade skid plate material is 50% stronger than the softer ornamental grades of aluminum (such as 3000-series diamond plate) that are frequently used for automotive accessories. Thunderhawk's aircraft aluminum provides the strength and protection necessary even if the vehicle's weight is being supported as you slide over a trail obstacle.

The Thunderhawk Performance RZR Fuel Tank Guard installs easily in about 20 minutes. This part is available in bare aluminum or with optional black powdercoat finish (adds $10.00). This is a complete kit including the fuel tank guard and all necessary hardware and illustrated instructions. Fits all 2014 & newer Polaris RZR XP 1000, XP-4 1000, XP Turbo & XP-4 Turbo, including those equipped with aftermarket skid plates and/or rear trailing arm guards. Made in USA. 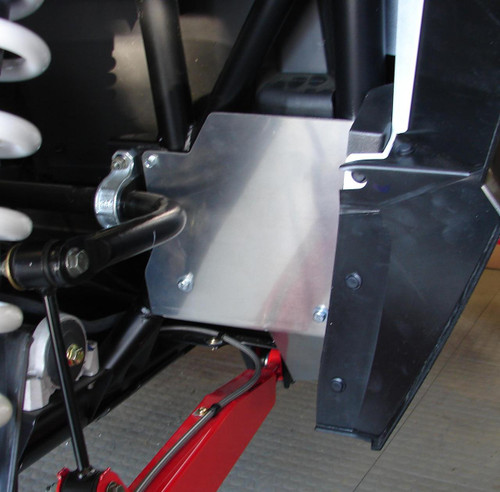